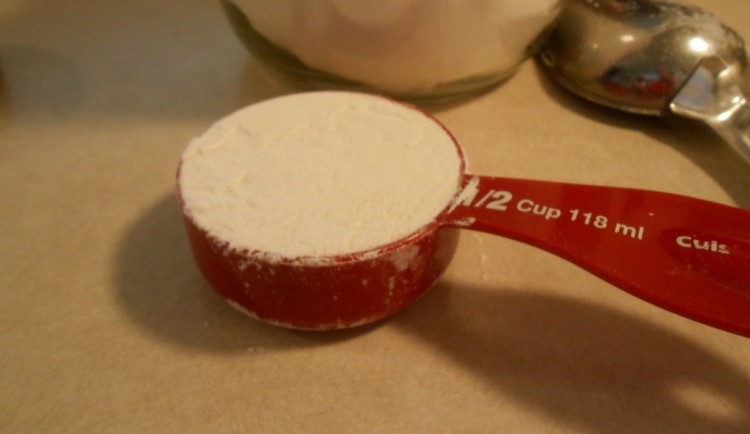 The measured amount of each ingredient you put into a dish is directly related to the outcome of the dish. The reason we have measured recipes is because someone a long time ago discovered that so much of this and so much of that made a pleasing combination. They then wrote it down to share with their friends. In these recipes the amounts and combinations of ingredients have been carefully calculated to expose you to a wide range of pleasurable taste experiences. So, please don’t alter the measurements in a recipe until you’ve tried it once. Then the next time experiment. This way you’ll have a solid base from which to judge your likes and dislikes, and to make adjustments accordingly.

There are many ways to measure with measuring utensils. You can scoop, pile, measure scantily, or measure level. Throughout these recipes we use level measurements for all measurements unless otherwise specified. By level we mean filling the teaspoon, tablespoon or cup level with its rim.

Many people, especially those just learning to cook, don’t know how to measure accurately, so I’m going to go into a little more detail here via teaching examples.

Take a 1 cup measuring cup. Measure 1 cup of water with it. You fill it to the top, right? You don’t under-fill it, and you can’t over-fill it, because it will spill over.

Take another 1 cup measuring cup. Measure 1 cup of flour with it. Do you under-fill it to 3/4 cup? You’re not supposed to if you want to measure 1 cup accurately. Do you over-fill it, so it looks rounded or looks like a hill in the cup? Many people do. If you over-fill a cup by scooping out a bunch from the flour jar, then you’re not measuring 1 cup. You’re measuring more than 1 cup.

Take a 1 teaspoon measuring spoon. Measure out 1 teaspoon of baking soda. If you don’t fill it, it’s not a teaspoonful, it’s less than that. If you scoop the baking soda out of the box, then you have more than 1 teaspoonful. You don’t really know how much you have, because you didn’t measure accurately.

It’s probably a good idea to have two sets of measuring spoons and measuring cups for the sake of efficiency. If you use a one cup measure for liquid and then have to measure a dry ingredient, you won’t have to rinse and dry the cup before using it. Same goes for the spoons.

If you store your flours in containers, always fluff them up with a scoop to aerate them before measuring, so you don’t get a ‘packed’ effect.

Altering recipes. There are two common temptations to alter a recipe. First: If we have a little bit extra of an ingredient we’ll add it to the dish rather than discard or store it. Please don’t add a little extra of anything no matter what the reason. Freeze it, store it, dump it. Do anything but upset the balance of the recipe. It’s not worth ruining a dish over, and an extra handful of some ingredients can do just that. If you feel strongly about throwing bits of food away, then store them in a covered container in your refrigerator throughout the week. At the end of the week challenge yourself by doing something creative with them.

The second temptation to alter a recipe is that we have preconceived notions of how much spice we’re going to allow ourselves to use in any given recipe, regardless of the recommendation. For instance, we’ll say to ourselves.”Oh, I don’t think I’ll like that much curry, so I’ll use just a dash”, instead of the recommended tablespoon. By doing this we deprive ourselves of new taste experiences, which is what cooking animal-free is all about. I understand that for some of you, trying something new will take a little or even a lot of courage. But accept the challenge and develop a sense of adventure by allowing yourself the freedom to try something different. You might just like it. Let your palate be the judge.

Now, to get back to measurement of a different sort. It is a good idea to keep a ruler in the kitchen in case you forgot what 1/4, 1/2, or 1 inch looks like; and that’s pretty easy to do, especially when you get down to very small measurements.

Get accustomed to measurement, since this is my primary way of communicating with you.